By Solen Aref on January 18, 2021
Advertisement

Laura Higdon of Auburn has donated enough blood to save multiple lives – 288 to be exact. Higdon, who works as an analyst at UW Medicine, has donated 12 gallons of blood with Cascade Regional Blood Services.

The COVID-19 pandemic has lead to a decrease in blood donations. These donations help supply blood to local hospitals and clinics.

Cascade Regional Blood Services’ director of communications, marketing, and community relations Candy Morrison said blood centers need donations from younger donors. “A lot of blood donors are older, that’s just the demographic, and a lot of them aren’t wanting to leave their homes right now. And so our regular huge donor base, we’re just not seeing them as much”.

Additionally, Cascade Regional Blood Services receives about 30 percent of blood from schools, which are currently closed due to COVID-19.

There Is No Substitute For Blood

Continuous donors like Higdon are helping blood centers remain operational. Higdon feels it’s her duty to donate when she can at the Federal Way blood center. She donates at least every 56 days, the amount of time required to wait in between blood donations.

Higdon was first introduced to donating when she worked at a YMCA in high school. A supervisor invited Higdon to donate blood with her, and Higdon has donated since. Despite her initial fear of needles, she felt motivated to donate knowing her blood could potentially help others. The previous summer, Higdon worked as a camp counselor where a camper’s younger sister had blood cancer. “I thought, well if that little girl can have needles poked into her, I guess I can do this to help somebody like her,” Higdon said.

According to Cascade Regional Blood Services’ website, someone needs blood in the U.S. every two seconds, but only 5 percent of eligible donors donate. Higdon shared, “there is no substitute for blood- it can’t be made in a lab. You never know when the blood that you’re donating is going to save the life of maybe someone you love.”

Anything You Can Do, I Can Do Better

Higdon’s brother, Earl Perdue, donates platelets regularly at the Tacoma center. He started donating in 1994 after his partner, now wife, asked him to join her in donating together.

Unlike donating blood, platelets can be donated every seven days, up to 24 times a year.

Perdue donates platelets about once per month. He shared he remains a continuous donor because, “just knowing that it’s going to help somebody who is in, you know, dire need of life-giving blood- in my case it’s platelets [donations].”

After donating multiple times, Higdon said she doesn’t feel bothered by the needle anymore. “It never even crosses my mind, like the pain thing, because it’s very instantaneous and it’s there and over. And it’s not pain, it’s just kind of a poke,” she said.

Her hope is those fearing needles donate despite that. “If you have a fear of needles, this is one way you can help get over that. I feel like [donating is] something that everybody that should just make a priority,” Higdon said.

After her blood donations, Higdon follows the same routine. “My ritual afterwards [is] my Oreo cookies. Because they have free cookies, if that’s not enough. If it’s the fear of needles, [that keeps one from donating] just know that there are oreo cookies on the other end,” she said.

When asked how much longer she plans to donate blood, Higdon shared “As long as I’m medically able to. Unless there’s something like, medication wise or health wise that prevents it- that’s when I’ll stop”. 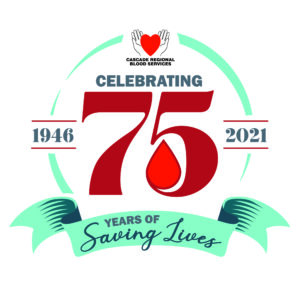 Morrison expressed that those on the fence about donating should know it’s safe. Potential donors are screened with tests beforehand to ensure they’re healthy and the phlebotomists wear personal protective equipment. Additionally, less donors are allowed inside than usual and social distancing is practiced. “I know it’s really hard for people who are apprehensive but the bottom line is it’s safe, it’s painless, and it’s saving lives,” Morrison said.

Not everyone can donate as much as Higdon, but donating even once is better than nothing. “If everybody who is healthy and eligible donated one time a year, there would never be a [blood] shortage,” Morrison said.

Published in Community, Health and News