By Lindsay Hicks on August 4, 2021
Advertisement

When soldiers return from deployment and hang up their combat fatigues, a different kind of baggage sometimes lingers within that they can’t easily pack away. For some, connecting with nature provides the best respite from the weight that baggage brings.

Flashbacks, hypervigilance, avoidance, survivor’s guilt, irritability, lack of trust, severe anxiety—these are just some of the symptoms associated with Post Traumatic Stress Disorder or PTSD. Thousands of women and men experience symptoms such as these when they return from combat.

About 9 Million Adults in the U.S. Have PTSD

PTSD is a mental health disorder that some people develop who have experienced a traumatic event. “ PTSD affects 3.6% of the U.S. adult population—about 9 million individuals. About 37% of those diagnosed with PTSD are classified as having severe symptoms. Women are significantly more likely to experience PTSD than men,” the National Alliance on Mental Illness (NAMI) states.

According to the National Center for Biotechnology Information (NCBI), as many as 500,000 U.S. veterans who served in the Iraq and Afghanistan wars over the past 13 years have been diagnosed with PTSD. In 2018, per the U.S. Department of Veterans Affairs, 17 veterans committed suicide each day.

There are a variety of coping tools for those with PTSD, including therapy and medication. However, there is one particular path of treatment that many have found to be (quite literally) lifesaving: ecotherapy.

Ecotherapy is the practice of being in nature to boost growth and mental healing. Resting on the idea that people have a deep connection to their environment and to the earth itself, practicing ecotherapy and nurturing the connection we have with nature is linked to less anxiety, fewer depression symptoms, increased relationships with friends and family, and clearer thoughts. 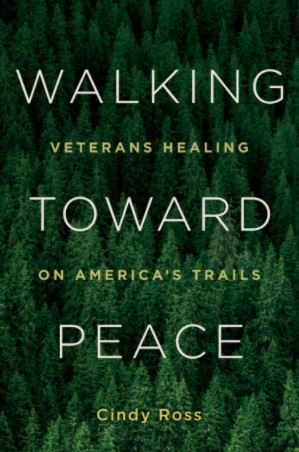 Award-winning author and avid hiker Cindy Ross captured the stories of 20 American war veterans who have used ecotherapy as a tool to combat PTSD after deployment in her newest book, Walking Toward Peace — Veterans Healing on America’s Trails.

“Every hike, whether it’s long-distance, or every time they go into nature, is a forward step toward their healing,” Ross said, “It’s a process, and they know it’s going to take their whole lives to try to work toward getting back to the peaceful, happy person that they were before they went into the military. It’s not a fix; it’s just a healing, helpful path.”

One Woman’s Journey to Helping Others

Ross is no stranger to long-distance hiking. For the last 40 years, she has discovered fulfilling contentment walking the trails of the North American continent. Ross has written several books detailing her experiences, including hiking classic A Woman’s Journey on the Appalachian Trail, which recounted her adventure as a single woman crossing the longest hiking-only trail globally, the 2100- mile Appalachian Conservancy.

Since then, her journey as a hiker and an author have continued to intertwine and flourish. The creation of her ninth book, Walking Toward Peace — Veterans Healing on America’s Trails, was inspired by a group of military veterans who occupied the hostel that Ross and her husband managed on the Appalachian Trail in 2013.

“We heard of particular hikers that we wanted to help, and there was a group of four or five … so I picked them up and brought them home. We had a big dinner, and they shared some stories from the war and also from the trail, and we just kept driving them ahead and bringing them back for four days… I flew up to Maine and finished with them, and that’s when I decided that maybe there was more I could do to help.”

From there, Ross and her husband founded River House PA—a non-profit organization that helps veterans and others heal through experiences in nature. According to its website, “River House PA facilitates healing through nature, in the form of outdoor adventures, recreational opportunities, and workshops for veterans and their families who have been affected by trauma. River House PA is a non-profit organization which provides the skills necessary to enable participants to go into the natural world and feel comfortable, confident, and safe.”

The veterans she met both on the trail and through her organization led to Ross’s desire to share their impacting stories with the public.

“My husband and I knew so much about nature and how it helps anybody feel good, and why wouldn’t it help people that were struggling and needed more peace in their lives, so we formed our organization. About a year or two later, from meeting different hikers on the trail, different veterans, and getting to know them, I decided I needed to tell their stories for them.”

Some veterans profiled in the book have taken hiking to the extremes—spending months on long-distance journeys, like hiking the 3,100-mile Continental Divide Trail or canoeing the 2,320-mile Mississippi River.

For many others, like Auburn resident Shawn Murphy, brief excursions in the outdoors offer an opportunity for healing.

Military veteran Shawn Murphy struggled in transitioning from military police to active civilian life about 30 years ago. He had a difficult time trusting people and turned to drugs and alcohol to numb his lingering pain. In 2012, Murphy discovered how nature’s healing properties helped him.

“I’m a lot calmer, and I sleep better, that’s for sure,” Murphy said. “It’s just the calmness and the peace you feel…on the trail, there’s a bit of a metaphysical feeling. for me, it was so addictive.”

Murphy began his ecotherapy journey by hiking epic long-distance trails, like the 2,650- mile Pacific Crest Trail, sometimes trekking for up to eight hours a day for six months at a time.

Murphy was quoted in Ross’ book saying, “when I finished the PCT, people could not believe I was the same person … after four-and-a-half months on the trail, I was more relaxed and happy. Before I began to hike, I was a pissed-off person. I dared you to try to knock the chip off my shoulder,” Murphy said, “I made up stuff about my life. When you do that, after a while, your life becomes that lie. By stripping away that façade, you see your real self … since hiking the trail, I’m more aware than ever.”

These days, however, Murphy finds solace simply by being in nature. In 2015, while hiking the Arizona trail, Murphy discovered the L.F. Ranch and got hired to work there.

It was at the ranch in Arizona where Ross and Murphy met.

Being Brave Enough to Face Yourself

“Shawn is very special to me because we talked for years, but I hadn’t met him. I wanted to spend some time with each person in my book … I flew down to Arizona, rented a car, drove all these miles on dirt roads to meet him at a trailhead,” said Ross,” I walked for miles to this ranch and then stayed there for a couple of days while he told me his story. It was a big stretch and leap for me to do that and a big leap of faith for him to tell me what he told me because his story is pretty personal and profound. He really opened up a lot.”

Chapter eight in the book is titled “Shawn Murphy” and poetically opens up in beautiful detail about the landscape of the Arizona wilderness where Murphy began to share his story. He unveiled the heavy parts of his past relating to his struggle post-military and the profound impact ecotherapy has had on his life.

“Cindy was actually a part of the healing process because I never really spoken openly, said Murphy. “To go ahead and say that for a part of your life, you were just a lying sack of shit, a drug addict, you know? You got abscess veins and all this, and when I look at my arms, I still see the old tracks. With Cindy, she wanted my story, and I had been avoiding giving it to her. I finally sat down and started to write it and began to see how much better I felt. It just freed you up.

Nature Can Nurture Everybody

Ecotherapy is not limited to individuals with PTSD. Ross has worked closely with various organizations that promote spending time in nature, such as Hike for Mental Health and special needs communities involving autistic children and people on the spectrum.

“They have so much success out there and in nature and hiking as far as making progress and focusing and things like that, so yeah, it’s good for absolutely anybody,” Ross said.

Studies show that spending time in nature is associated with good health and wellbeing. According to the U.S. National Library of Medicine, a recent study used mobile EEG devices to monitor participants’ emotions during a simple walk in nature. Researchers found that the participants were more likely to experience meditative-like brain waves and exhibit less frustration and irritation if they were walking in a green space than a bustling shopping center or a busy business area.

“…put down the cell phone.”

Ross encourages the general population to read the book (get it here), regardless of military status. “They make up a big part of our population, and I think it’s responsible for all of us to understand what they are going through,” Ross said, “Instead of saying, ‘thank you for your service,’ to a vet down the street, your neighbor, take them out. Say, ‘let’s go for a walk,’ pack a picnic and go for lunch, and introduce them to that world … It doesn’t have to be some kind of death-march but get them out on a beautiful day. We can all do that. Everyone knows a vet somewhere.”

Spending time in nature is beneficial for everyone. “It doesn’t matter if you’re having issues in your life or not, even if you’re well adjusted, just being outdoors, man,” said Murphy, “put down the cell phone.”

Not Sponsored: Links to Ross’ books on Amazon.com have been included in this article as a courtesy.