For close to a century, the Masonic Temple has occupied the primary intersection at the heart of downtown Auburn. In addition to its architectural distinction, the building reflects the rapid growth of Auburn as an agricultural market and regional rail center during the prosperous decades of the 1910s and ’20s.

King Solomon Lodge No. 60 is Established

As early as 1886, settlers in the farming community of Slaughter (renamed Auburn in 1893, two years after incorporation) and the Green and White River valleys gathered to discuss the possibility of forming a local Masonic lodge. These prospective members had been affiliated with the Masonic Order in their previous hometowns and states.   After lengthy discussions, the applicants petitioned to establish a new lodge, with the Grand Lodge issuing that dispensation in May of 1889, shortly before Washington Territory became a State.  The following year, on June 11, 1890, a charter was granted to King Solomon Lodge No. 60.

Auburn Masons were proud of the fact that Lt. William Slaughter, who lost his life in hostilities with White River natives in 1855 and for whom the town was named, was the Past Master of Steilacoom Lodge #2.  Another note of pride was that the first governor of newly-established Washington State, Elisha P. Ferry, was a Past Grand Master of Masons in Washington. The tradition of member prominence was continued in Auburn, where a number of early community leaders joined the ranks of King Solomon Lodge No. 60.  Among the early, and most active members was Aaron Neely, Sr., Valley pioneer and builder/proprietor of the 1894 Victorian Farmhouse known as Neely Mansion. 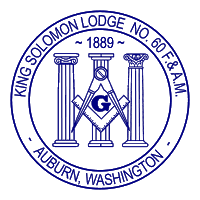 Like other Masonic organizations, Auburn’s Masons were dedicated to mutual support, sociability, and involvement with the community.  The Lodge experienced two challenging setbacks early on, when, in 1897 and again in 1898, fire destroyed all of its records, regalia, and (in 1898) jewels on loan from the Grand Lodge. However, the group persisted and King Solomon Lodge No. 60 carried on.

The farming community of Auburn had enjoyed the gradual improvement of local rail service through the 1880s and 1890s. The situation improved considerably when the Northern Pacific rerouted its main line over Stampede Pass directly into the city and the Seattle-Tacoma Interurban Electric Railway through the Auburn and Kent Valleys was completed in 1902.

With continuing prosperity in the 1920s, established organizations like the Masons looked optimistically toward the future. Through the 1890s and 1910s, King Solomon Lodge No. 60 had met in five different rented halls situated around town. After much discussion, the Lodge made a decision to erect a new temple building to accommodate its own activities and those of related groups.

The Lodge had owned a vacant site at the corner of Auburn Avenue and Second Street NE, but the committee felt strongly that the new building should front on Main Street, the thriving commercial thoroughfare. Brother Aaron Neely, Sr. and his wife Sarah donated a new building site on East Main and C Street SE (now Auburn Way South) that was free and clear of debt and ready for development.

Construction began in September 1923 and was completed the following year. Designed by the architectural firm of Heath, Gove, and Bell of Tacoma, it was built with white glazed terracotta in the Italian Renaissance Revival style.  The ground floor was leased to commercial tenants; two long-term occupants were the Taylor Lemar Mortuary and National Commercial Bank.

After occupying the new building in the summer of 1924, King Solomon Lodge No. 60 continued to expand its role in the community. In addition to the Masonic meetings held there, it hosted many social events and became the primary gathering space for the greater community. The Lodge was considered “the place to be” during its prime and the hall was often filled to capacity. There are reports of fighting amongst the various groups who wanted to rent the limited meeting space.

Several youth organizations were formed in the 1920s, including DeMolay, Rainbow Girls, and Job’s Daughters.  Lodge membership rose from 192 in 1924, to a peak of 451 in 1961.  Over the years, the Lodge sponsored numerous social events such as the annual Children’s Christmas Party. The Temple dance hall was made available to other organizations for rent and the Lodge also contributed regularly to community improvements ranging from the development of parks to social services.

The Lodge continues its support of charitable efforts through Washington Masonic Charities, as well as fundraising and outreach efforts on behalf of local causes, which include a high school scholarship program.

The building remains one of the few pre-war Masonic Halls in the South Sound and continues to be owned and operated by the Freemasons.  It was listed on the National Register of Historic Places in 2015, with the application noting the building was “an unusually sophisticated, urban version of fraternal architecture for a town of less than 3,500.”

The lodge remains today the only fraternal hall in the city still in its original use, symbolizing a long and enduring tradition of Masonic social involvement in the community.

Published in Community and The Lighter Side