After far too long, the Auburn Community Teen Players are returning to the stage. This weekend ten actors 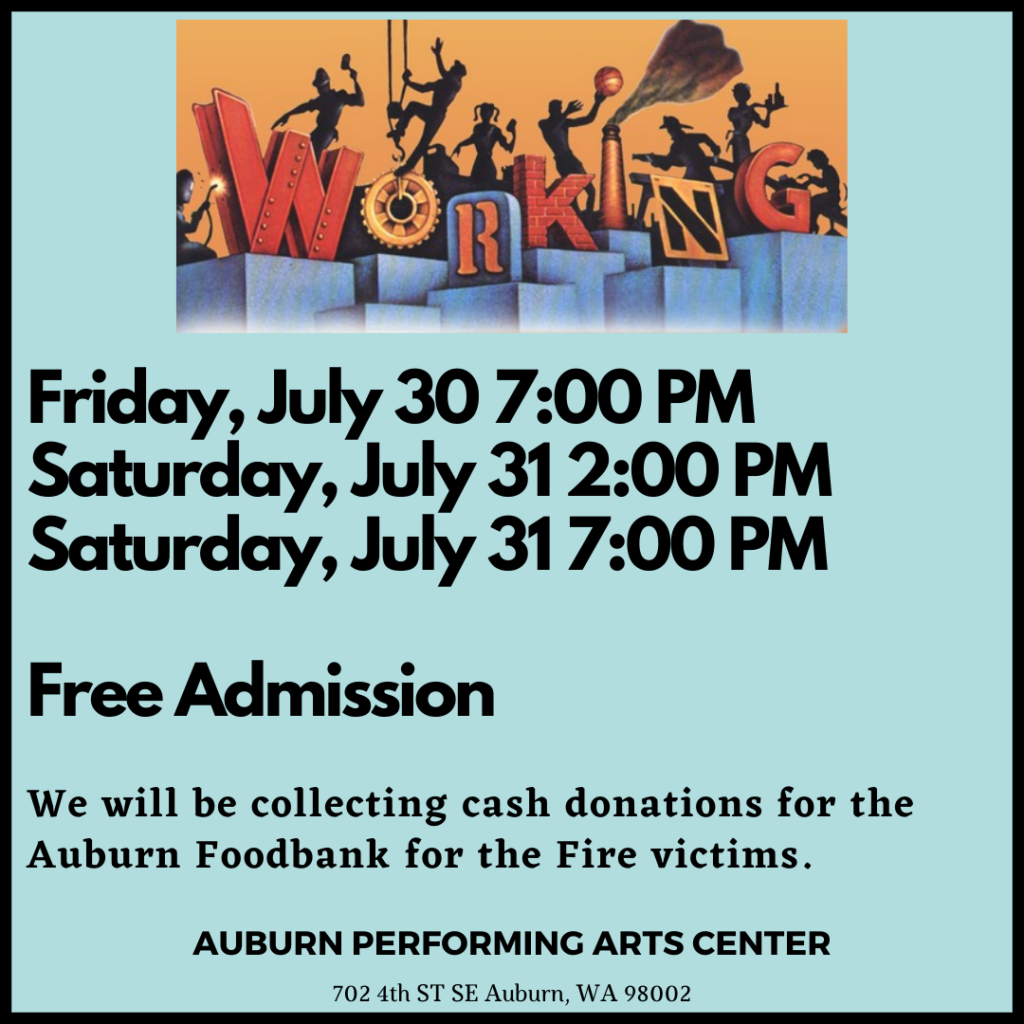 will present Working: A Musical, a play that examines the lives of 26 people from all walks of life to paint a vivid picture of the American worker.

“[Returning to the theater] felt like a homecoming,” said Directors Suzie Newbery and Joe Blotner. “The kids missed it; the adults missed it; it was really good to be together doing what we love.”

Blotner and Newbery, and their children, have been active with the Auburn Avenue Theater for over a decade. Working: A Musical is the third consecutive teen musical they have directed.

Auburn’s young actors have worked hard and are excited to present this Tony award-nominated musical. Based on Studs Terkel’s best-selling book of interviews with American workers, Working: A Musical “is unique in its patchwork of monologues and songs that compel us to look at the person behind the job,” describes the Hollywood Reporter theater review.

Unlike many other plays, Working: The Musical doesn’t have a linear storyline. The collaborative efforts between songwriters, including Stephen Schwartz (Godspell, Wicked) and Lin Manuel Miranda (In the Heights, Hamilton), provide a variety of musical flavors.

“The teens are ready, and all the elements of the show have somehow gelled beautifully, despite the chaos of the past week. All we need is an audience to bring it all together,” Blotner said.

Despite the nearly 50-year difference, Working: The Musical is just as relevant today as when originally produced in the 1970s. “With the recent pandemic, huge swaths of us were out of work, which not only impacts our quality of life but also our identities,” Blotner said. “Many people have struggled with the question, “How do I define myself if I’m not working?” And, as more and more of us [can] go back to work, we’re re-evaluating where and how we want to do that.”

While similarities remain between the post-WWII era of the original Working: The Musical and today’s society. These differences led to conscious choices in casting by Newbery and Blotner.

“With our current society’s progress against gender bias, we were mindful of not stereotype-casting certain genders for certain roles,” Newbery said. “For example, we cast a woman as a firefighter. There are many female firefighters, but when people think of firefighters, they often picture a man doing that job. We want to showcase the diversity of our workforce.”

Adjusting for the Auburn Teen Players

Other adjustments were made for the Auburn Community Teen Players cast. The play’s script is written for six actors and has been adjusted for ten. “We had to go through a rigorous planning and casting process, as all actors are playing multiple roles, but not exactly as the script designed it,” Newbery said.

In addition to adjusting for more actors, the directors changed the concept for the show. “Traditionally, the play is a series of vignettes where the characters are in their work environment and talking directly to the audience,” Newbery explained. “We thought an interesting take on these monologues and songs would be to set this show as a support group meeting. This structure also pushed the actors to dig into how their characters connect with the others in the group.”

The script’s language was also cleaned up to ensure the play is a PG-13 production.

The Show Must Go On

With just a week to go, the cast and crew were feeling confident for opening night. That is, of course, until a fire in an adjacent building caused water and smoke damage to the Auburn Avenue Theater. The damage threatened the shuttering of the play before it even opened.

With swift action, the play moved from the Auburn Avenue Theater to the Auburn Performing Arts Center (at Auburn High School). “We are so grateful to the efforts of Chris Olds and the PAC staff for their responsiveness (over a weekend!) and collaboration this week!” Blotner said.

With a stage roughly four times the Auburn Avenue Theater’s size, the cast, and crew have spent the week restaging, rehearsing, and adjusting to the new setting. Despite the necessary changes, the move “was far smoother than we had anticipated,” Newbery said.

Not only does the PAC have a larger stage, but it also has more seating. This means there is a greater opportunity for you to see the Auburn Teen Community Players debut this great play. Though tickets are free, cash donations to the Auburn Food Bank for the Max House Fire victims will be taken at the door in lieu of a ticket fee. So come out this weekend and support the Auburn Teen Community Players and support the community.

Want to get involved in theater?

It doesn’t matter where you live or how old you are – theater is for everyone. We asked Newbery and Blotner if someone were interested in theater, how they could get involved. Here’s their answer:

“No matter where you live, the arts are essential to having a vibrant, thriving community. Your town, or a nearby one, almost always has a community theatre. Some are larger than others, but they all want to include you. Volunteer opportunities abound, from kids camps to set painting to costume-making, to ushering, and, of course, performing! Our best advice is to reach out — ask when the next show is, when the next auditions are, and ask how you can get involved. We all have gifts to share, and your local community theater needs them! Don’t think that “the theater community” is an isolated group. They are people just like you who one day took that first step to get involved.”

“We can’t count how many times over the 40 years we’ve each been involved with theatre, that we’ve heard the phrase, “I’m so glad I did this show. Everyone is so nice and welcoming. I feel like I really belong here.” Theatre brings people together in a way very few other activities can. You have to be collaborative, vulnerable, and accepting as you work with others to construct something out of nothing but words on a page. It is truly special.”

The Auburn Avenue Theater Update
Provided by the City of Auburn

Staff and patrons of the Auburn Ave. Theater are devastated that the fire on 7/24/2021 has impacted the downtown Auburn community, including residents and business owners that were theater neighbors.

The Theater sustained some water and smoke damage and will undergo a structural assessment before it is open again to the public. The Auburn School District has graciously offered to host this Teen Production at the Auburn Performing Arts Center.

We will continue to keep our patrons and the community posted on the Theater status as we learn more over the coming weeks.