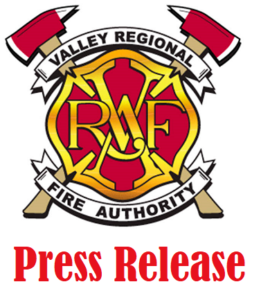 The Valley Regional Fire Authority Board of Governance did not have to look far for their next chief executive. The Board appointed current Deputy Chief of Operations, Brent D. Swearingen to serve as Fire Chief/Administrator effective January 1, 2019.

“Chief Swearingen brings 34 years of experience in the fire service, significant academic achievements and industry credentials.  During his tenure as deputy chief at VRFA, he has been a proven leader with demonstrated results,” said Board Chairman Nancy Backus, who is Mayor of Auburn.  “My fellow Board Members and I look forward to working with Brent to continue the longstanding commitment of delivering outstanding service to the people who live, work and visit our communities.”

“I share the confidence the board has in Brent,” Robertson said. “He is a man of integrity and skill, always striving to do the right thing. For me, having the ability to leave knowing the organization I care so much about is in the hands of someone who is so talented and cares equally is heartening.”

Robertson selected Swearingen, from a nationwide field of candidates, to lead fire and EMS operations at VRFA in 2012. Swearingen began his career as a firefighter in 1984 as a firefighter at the Reno, NV. Fire Department and served in a variety of supervisory and management positions before his appointment as Operations and Administration Chief, a post he has filled for eight years. He has been a longtime mentor to developing fire officers and has worked extensively as an assessor and subject matter expert for executive-level testing on the West Coast.  While at Reno, he served a stint as the Special Assistant to the City Manager, gaining a global perspective on municipal issues.

After completing High School, Swearingen joined the U.S. Army, serving four years.  He served as a Russian language Intercept Operator with a top-secret security clearance, prior to his honorable discharge.  Swearingen is a graduate of the University of Phoenix with a Bachelor of Arts Degree in Business Management., a Master of Arts degree in Homeland Security Studies from the Naval Postgraduate Naval Postgraduate School, Monterey, Calif. and a Master’s Certificate in Alternative Dispute Resolution from the University of Denver.

Swearingen is active in the greater Auburn community, serving as a board member for both the Auburn Kiwanis and Nexus Youth & Family Services. A Hookstown, PA, native, Swearingen is the father of four adult children and lives with his wife, Lori, in Ravensdale.

The new Fire Chief/Administrator replaces VRFA Administrator Eric Robertson and will work collaboratively to seamlessly transition the leadership team at the New Year.

The above is a press release from VRFA.  The Auburn Examiner has not independently verified its contents.