By Elizabeth Miller on November 2, 2018
Advertisement

Auburn is home to numerous organizations that have a significant impact on our community, the “See Ya Later” Foundation is among them.   The Foundation serves youth and families in the area facing medical crisis. With the mission of “Inspire Youth and Encourage Families,” this foundation does just that.

To date, 53 Washington families have been served, with $116,052 in financial gifts given!

Founded in honor of Carmen and Bob Banke’s son, Scott, the “See Ya Later” Foundation was formed in 2006 in McMinnville, OR.  Under the leadership of Brian Williams, it expanded to Auburn in 2010.  At age ten, after a routine physical, Scott was diagnosed with a bone cancer called, Osteosarcoma.  Throughout his battle with cancer, Scott maintained a positive, upbeat, attitude.  With his faith as his guide, Scott ensured others he was OK with having cancer.  This strength was a foundation for other children, their parents and at times the medical professionals that cared for him.

On their website, the “See Ya Later” Foundation explains the origin of their name as coming from, “a video Scott made while on a Make-A-Wish cruise. One of the last clips, Scott turned the camera on himself and told of the day’s events ending by saying “See Ya Later!” The brief but poignant clip ended Scott’s memorial service, telling over 1,100 people “See ya later!”; which began a lifeline of hope for so many families.”

The “See Ya Later” Foundation Mission

Serving South King and North Pierce counties, the “See Ya Later” Foundation primarily assists local families in medical crisis. In most cases, this means children diagnosed with cancer or another life-threatening illness. The foundation provides support to the families that best suits that family at the time. These services can range from gift cards for food and gas, to yard makeovers, to personalized VIP family experiences designed for family bonding.

The foundation also serves our community with their college scholarship program.  Scholarships are awarded to students who are proven impact makers who will make a positive difference in the lives of others in college and beyond.   Scholarships have been awarded to 20 Washington students, totaling $29,000. 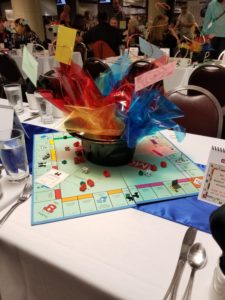 Every October the “See Ya Later” Foundation Washington holds their annual banquet and auction.  This year’s auction used the classic board game Monopoly for its theme, offering a variety of on theme ways for attendees and sponsors to donate.  In total, the auction raised $75,531.  The highest item of the night, a trip to Palm Springs during the live auction, went for $1,600.

“This money will primarily assist local families in medical crisis. Our Seeds of Hope team works within a budgeted amount per family with a schedule of assisting 12-18 families per year. Funds from this event will ensure that all of those families will receive the proper care, support and assistance from our staff,” said Williams.

Support from the Business Community

Each event the “See Ya Later” Foundation holds calls for sponsors from the local community.  The annual banquet and auction had 35 businesses and organization sponsors.  Among these sponsors was Edward Jones Financial Advisor, Greg Dobbs.  Dobbs not only was an auction sponsor but was also the auction’s emcee for the third year.

“I am fortunate that cancer has never struck my family, but I know how destructive it can be to the lives of those that [The “See Ya Later” Foundation] helps.  If I can do a small part a few times a year, I am happy to do it.  Brian and the SYL Board deserve a lot of credit for the work they put in,” said Dobbs.

Dobbs explained that the “See Ya Later” Foundation’s impact on local families is what he likes most about the organization.  “It is the direct impact on families.  Even small things like gas cards to make it to the hospital or big things like helping to send a family to Hawaii have a huge impact at the personal level.  A real direct contribution to the family’s lives.”

Washington’s chapter of the “See Ya Later” Foundation has received such support, they’ve outgrown their offices.  After their annual auction,  staff and volunteers moved relocated to their new office space located at 204 Auburn Ave.  The office is expected to be open for regular business on November 5th.

A message on the foundation’s website shares “the Foundation board is honored to carry on Scott’s legacy, zest for life and undeniable Faith in God. Although the “See Ya Later” Foundation has accomplished a great deal over the last several years, we are truly grateful and humbled by the support of so many. There are a lot of children that need to know they have hope for their future and Scott’s legacy has inspired us to help them find it.”

Published in Community Support and News