The smell of smoke still permeated the air of downtown Auburn Wednesday afternoon.  But that didn’t stop onlookers from stopping to take in the broken and burnt remains of the historic Heritage

Building.  Charred remnants of the building lay scattered along Main Street, evidence of the fight between the blaze and the 82 fire personnel the night before.

Per the city press release, “Due to the extensive damage to the structure, the City has posted an order of no entry to the entirety of the building. Main Street between Auburn Avenue and Auburn Way North remains closed to through traffic until further notice, however, businesses on the north side of the street may still be accessed by foot”

Though it is very likely the building will be a total loss, there were no injuries beyond several patients treated at the scene for smoke inhalation.  Sadly, Wednesday morning it was learned that a dog was lost in the fire.

The Heritage apartments had 35 apartments, occupied by 39 tenants.  The apartment manager confirmed that all tenants were accounted for Tuesday night.  The NW Red Cross was on scene Tuesday night offering aid to the displaced families and individuals from the Heritage Apartments.  The shelter arranged by the Red Cross only had five stay the night.  The shelter remains available to those displaced by the fire. 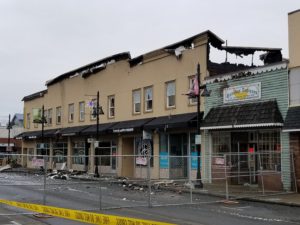 Long restaurant, Avatars Virtual Reality Arcade, and G & E Spa. The interior damage to Bananas Antiques is unclear at this time, though externally it does not appear as damaged as the main building.  Banana Antiques does, however, have a bright orange sticker declaring “NO ENTRY.”

The Rainbow Cafe, Nail and Lash Bar, and Ryan & Driessen Attorneys were not lost to the fire.   Due to the condition of the building and damage caused by the event, these businesses will need to take inventory and address any issues before reopening for business.  We will update on the status of these businesses as soon as we know.  The business on the corner of E Main St and A St S is under construction as a part of the Facade Improvement Project; that construction continued as of Wednesday morning.

Mayor Nancy Backus shared, “Our heart is heavy as a community for the families and business owners who have lost so much, but I am also uplifted by the immense outpouring of love and compassion from our city and region during this difficult time. I am also deeply grateful to our first responders whose skill and dedication ensured that this event did not become a larger tragedy. We will work together in the coming days, weeks and months to assist all involved in any way possible

The city has shared that “City Economic Development staff have begun outreach to the affected businesses to assist with recovery and rehabilitation efforts. City Human Services and Emergency Management staff are working with displaced residents to provide essential items during the short-term, as well as assist with long-term housing coordination. Red Cross staff are currently providing day and evening shelter for displaced residents, as well as food, showers and medical assistance.”

Throughout the city, donations continue to be gathered and are now being brought to the Auburn Food Bank.  The food bank is normally closed on Wednesdays but opened to take donations from those wishing to help individuals impacted by the fire.  The current needs are towels, washcloths, toiletries, new or gently used adult clothing (specifically cold weather), no-cook or ready-to-eat food items (ex: cereal), and money. The Auburn Food Bank, located at 930 18th Place NE, will open Thursday at 8:30am until 3:30pm.

Check their website or Facebook page for further information on donation drop off times. Monetary donations can also be made via telephone (253-833-8925) or the website using a credit card, and are tax deductible.

Those wishing to donate furniture may do so Saturday, December 30, 2017 and Saturday, Janua,ry 6, 2018, from 10 a.m. to 3 p.m. at the Game Farm Park Annex Building (2840 Riverwalk Drive SE.)  The currently requested donations are for small apartment living items (i.e. table and chairs, small to medium-sized sofas, beds, etc.)

Though the Fire Marshal was able to enter the structure, an official cause of the fire has not yet been determined.  The fire remains under investigation.

More from CommunityMore posts in Community »