Shane Morey heads to Mexico to teach after losing everything

Shane Morey heads to Mexico to teach after losing everything

Shane Morey lived in apartment 19 in the Heritage Apartments, right above the Homeplate Pub. He’d lived there for a year and a half. On the day of the Heritage Building Fire, Morey had his vital documents with him. Serendipitously, Morey had taken his documents that day to apply for his Visa to work in Mexico.

Morey put his resume on several sites for ESL teachers. With a background in teaching, and having taken Spanish, he wanted to open the possibly of being able to teach abroad. A recruiter from the Berlitz Language School in San Luis Potosi recently contacted Morey and offered him a position.

As he was still in a lease, Morey was uncertain if he could accept the job in Mexico. Though he was taking steps to be able to take the position, he had not yet determined if he would go. Call it whatever you want, but the fire allowed him to accept the position.

The position is a contract position, meaning he can go for as long as he wants. Morey currently has agreed to a two-year contract. Though he has never been to San Luis Potosi, the city is roughly five hours north of Mexico City, where he has friends. He also grew up and did graduate school close to the border, so is familiar with the area.

Living in another country is not a new concept for Morey. Before moving to King County, he was in Moldova with the Peace Corps. Before the Peace Corps, he was in the Navy. The Berlitz Language Center has schools in many other countries. Continuing to teach at Berlitz would allow Morey to see the world while teaching, which he agreed would be fulfilling. He shared that he wants to explore Southern Mexico. He also would like to go back and spend more time in Lisbon, Portugal.

Morey explained that serving is a part of who he is, that that part of him has always been there. While he followed in the footsteps of all the men in his family by serving in the military; he felt called more to public service and activism. Morey shared that from an early age he related to Angela Davis. He shared that growing up without having a lot, he has a feeling “we can do better as a society.”

On the day of the fire, Morey was at work in Renton. He received a text message alerting him to the fire from a fellow tenant (who was on vacation in Montana, and had been informed by another tenant). He did a quick internet search and watched the news coverage of his home burning, live. 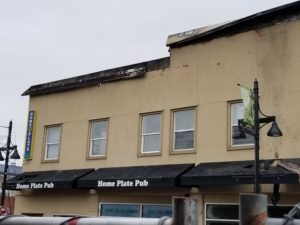 Morey’s unit was on the opposite side of the building from the laundry room, where the fire began.  As both the roof and the floor had caved in, residents were told to expect nothing to be salvageable. This meant that, like all the residents of the Heritage Apartments, he lost everything.

Because he traveled and lived abroad, Morey lost many sentimental items. While he could purchase replacements, it would not be the same as the new items would lack the connection and value. One example he gave was Matryoshka dolls the family he stayed with in Moldova brought him back from Russia. He also lost the guitar he’d had for many years.

Morey shared that the benefit of working with homeless veterans, is knowing the resources available to homeless veterans. The King County Veterans Program immediately took care of him, arranging new work clothes, Safeway gift cards and a place for him to stay. He commended the quick work of the veteran services, praising their services.  He shared that his friends also reached out, one even starting a GoFundMe in an effort to help him rebuild.

Services available to those unaware

Unfortunately, another resident in the building, a fellow veteran who left the military in 2015, wasn’t aware of the services available to him. Morey took his neighbor and connected him with veteran services.

Some of the organizations that provide resources available to those in need did come out to the shelter at Cascade Middle School. Morey acknowledged that “people coming together is one of the positives” of the fire. He hopes that the awareness and community service continue.

With his Visa not expected to come through until March, Morey has some time before he leaves for Mexico. With no ties holding him in King County, Morey plans to spend that time with his family. This Friday he is expected to leave for Payette, ID to visit family and see his Nephew. His sister and other nephew live in Arizona and Morey hopes to get to see them before he leaves.