By Nathan Schumer on March 19, 2018
Advertisement

This piece is an analysis of the voting public of Auburn and will outline the most distinctive pieces of the coalitions of Nancy Backus and Largo Wales. Future pieces will hit on the ethnic, income, and interest group disparities between the two mayoral candidates, as well as what other elections in 2017 (particularly the election in the 31st Legislative District) can tell us about the voting public of Auburn and the 2018 elections.

Backus and Wales were both candidates for Mayor, having won the primary in August 2017. The election was fairly contentious,

as the candidates traded barbs around a series of issues, despite often agreeing upon them. Wales particularly focused on ST3, homelessness, sanctuary cities, and safe consumption sites.  In most instances, Backus agreed with Wales on sanctuary cities, homelessness and safe consumption sites, if with a different approach. Backus was ultimately victorious in the election of November 7, 2017.

Utilizing voting data from King and Pierce County’s open data collection service, a dataset focused on the precincts of Auburn was composed. Relevant data on the appropriate census tracts was pulled from the 2015 American Community Survey and then matched to the political precincts of Auburn.   There are a total of 75 voting precincts in Auburn.

Though thorough analysis and collection were done, some data is missing for several precincts (because of data quality issues).  Additionally, there are some potentially confounding issues, as tracts are much bigger than precincts and contain multiple or multiple pieces of precincts.

Next, three response variables were defined to measure for the modeling: whether Backus or Wales had won (marked by a 1 or a 0), the margin of Backus’ victory in a precinct, and the turnout percentage. For each of these variables, a variety of models were tested for their predictive accuracy.

The first question is: what does a typical Backus or Wales precinct look like?

The most appropriate models were selected to dissect and present here for their content. Models are necessarily somewhat reductive, but they can help us understand what some of the more influential factors were in dictating votes for Backus and Wales respectively.
Advertisement

The first question is: what does a typical Backus or Wales precinct look like?  To answer that, the first model used logistic regression to predict whether a precinct would go for Backus or Wales. The models use both training and testing data, thus the model is formed with the majority of the data, and some part of the data is set aside to test the accuracy of the model, which is the common metric for the accuracy of the model. Thus, this model classified 83% of examples correctly on unseen test data (not exceptionally accurate, but still significant). Logistic regression is also methodologically informative, as it provides an account of what factors positively or negatively correlated with an identification, as is laid out in the following two graphs.

The two graphs focus on a variety of different census information.  The larger or smaller the coefficient, the more strongly it influences the identification of a precinct. The main fault lines in the coalition tend to be economic and professional. For instance, Backus support heavily correlates with working in local government or professional, scientific and technical services. Another heavy corollary for Backus support is being a renter (note the prominence of gross rent, contract rent, and income in renter-occupied households). Finally, income itself is a good proxy for Backus support; her coalition seems to include the wealthy (the top 5 percent, gross income in 2016). However, Backus is also supported by single female householders who are below the poverty line and making below the threshold of what they require.

The Wales coalition is slightly less clear, although the importance of retirement income is quite distinctive. It suggests that retirees were more receptive to Wales’ message, which can be roughly characterized as escapist inasmuch as it was focused on ignoring the present problems of the city, and casting back to or ejecting the present forces at work in the political landscape.  Which is to say, this strategy does seem to have been successful. Wales did well with men in education, health services, and social assistance.  She also did well with the self-employed who had side businesses. Finally, Wales did well with a particular segment of the rich (those with high aggregate wage or salary income), those with income deficits (but married couples specifically) and those with income deficits more generally.

The second question is: what factors explain Backus’ margin in the precincts which she won, i.e., what factors are common to the places she prevailed by a greater margin? For this model, gradient boosted regression was used. This is a technique that uses feature importance and their coefficients to rank how significant a feature is. Subtracting the predictions of the model from the actual dataset reveals the level of error, which is the measure of the model’s accuracy.  However, to standardize it, the root of the squared mean of all the errors (RMSE), was used. The error on the training data is 9.14, and on the test data is 18.825.  This concludes that this model is on average, about 18 votes off. The average margin for Backus in each precinct was 18 votes, so this is a fairly reasonable level of error to expect.

The model indicates Backus did quite well in places with higher turnout, suggesting that she inspired her voters to show up. Certain professions and different types of income also played a role.  But the most significant correlation appears to be other local council and school board races, especially undervotes and the contested Brown-Kahler election. The third most important feature is Larry Brown’s performance, showing that the results of the two races were heavily correlated.

What Part Did Undervotes Play?

A model using random forest regression was built to predict turnout with an RMSE of .05 on test data (the average is .31). This model uses feature importance, not coefficients, to determine the significance of a variable. In honing in on this model, it was discovered that turnout correlated intensely with undervotes, the phenomenon of filling in ballots for the races above, but not for this specific race. It also included precincts with more Native American members. Undervotes occur predominantly when voters do not vote in down-ballot races.

Turnout here is strongly correlated with undervotes, especially those on the school board.  This intuitively makes sense, as surges in turnout might correlate with more interested voters in a particular race. While this first graph measures the feature importance of a particular factor, when you sum up the actual undervotes, the results are even more striking. 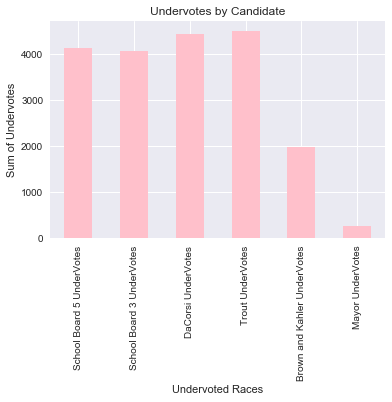 Note that there were only about 200 undervotes in the Mayoral race and about 2000 in the contested Brown-Kahler city council race. However, the school board and the other two (uncontested) council races have about 4000 undervotes, suggesting that many people came out to vote for Mayor, but had no interest in the city council or school board races. This is also positively correlated with precinct turnout, meaning people in precincts with higher turnout were more likely to undervote. It’s difficult to know exactly what that signifies—these were after all uncontested races.

Published in News, Politics and Research