By Aggregated Content on March 1, 2022
Advertisement
At the beginning of the COVID-19 pandemic in March 2020, doctors had limited knowledge of how to respond to this new disease. Physicians in hard-hit regions across the world had to learn as they treated the first wave of patients, relying on ventilators and high-flow oxygen treatments, as well as early drugs such as hydroxychloroquine and remdesivir to reduce patients’ risk of dying.
Years later, we have since seen several vaccines prove highly effective in preventing severe disease. The Pfizer/BioNTech, Moderna, and Johnson & Johnson vaccines were all developed in record time, building upon past research into coronavirus vaccines and genetic technology. In December 2021, unvaccinated adults in the U.S. were 2.4 times more likely to test positive for COVID-19 than fully vaccinated adults and were 14 times as likely to die of the disease, according to the Centers for Disease Control and Prevention. The likelihood of unvaccinated infection rose to 2.6 times as recently as January 2022.At the same time, pharmaceutical companies have developed a variety of drugs that may alleviate COVID-19 symptoms in those who test positive. Monoclonal antibody treatments provide a boost to the immune system, as patients receive infusions of lab-made proteins designed to fight off the coronavirus. In December 2021, the U.S. Food and Drug Administration provided emergency authorization to an antiviral pill treatment that reduces the risk of COVID-19 hospitalization and death. Both the monoclonal antibodies and pills are most effective when patients receive treatment soon after their COVID-19 symptoms begin.

Relative to the fact that this is a novel disease never before known to medical science, progress in treatment development has been remarkably swift and agile. Stacker compiled a list of milestones in the availability of COVID-19 treatments and vaccines throughout the first two years of the pandemic, using information from the Centers for Disease Control and Prevention, the U.S. Food and Drug Administration, and media reports. 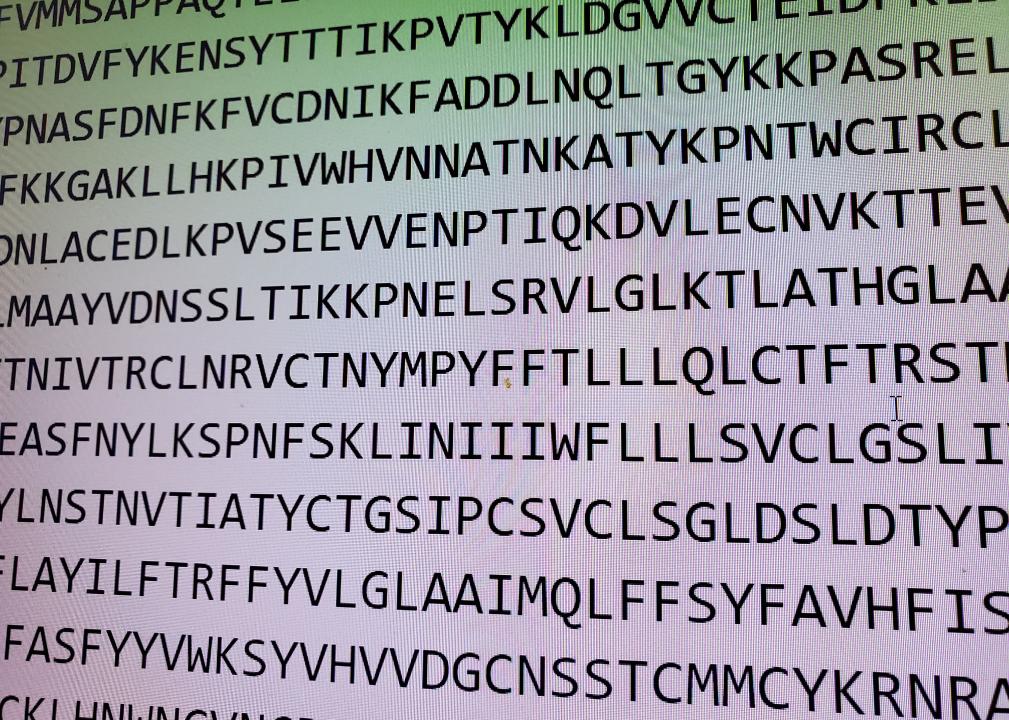 January 2020: SARS-CoV-2 sequence is made public

The world first learned about the coronavirus in late 2019, as the disease spread through Wuhan, China. Within weeks of the first documented COVID-19 cases, a group of scientists—including those in China and international collaborators—published the virus’ sequence on an open-access site. Virologist Edward Holmes shared a link to the sequence on Twitter, enabling researchers around the world to begin studying the virus.

That early research included vaccine development at Moderna and BioNTech, a German biotechnology company that would soon partner with Pfizer on clinical trials. As both of these companies had previously been working to produce vaccines based on genetic sequences, they were able to quickly adapt their work to the coronavirus. Moderna’s first clinical trial for its vaccine started in March 2020, just two months later. 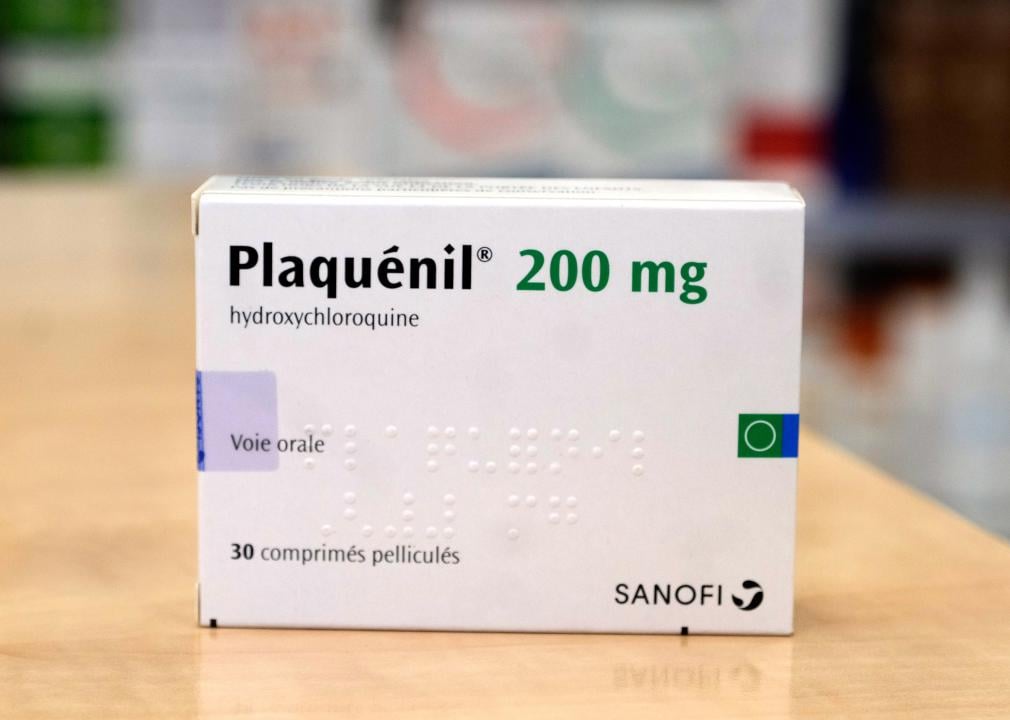 In the early months of the pandemic, doctors treating severely ill COVID-19 patients had very little information about what drugs or treatment methods might be most effective. This knowledge gap led some doctors to try out drugs that had not undergone clinical trials for COVID-19, while regulators attempted to provide guidance as quickly as possible.

One drug that became popular during this period was hydroxychloroquine, a drug primarily used to treat malaria and some forms of arthritis and lupus. After some early data suggested hydroxychloroquine might also work against COVID-19, the FDA provided this drug with an Emergency Use Authorization in late March; it was also touted as a potential miracle drug by then-President Donald Trump. Further clinical trials showed that hydroxychloroquine did not actually help alleviate COVID-19 symptoms, however, and the FDA revoked its authorization in June 2020. 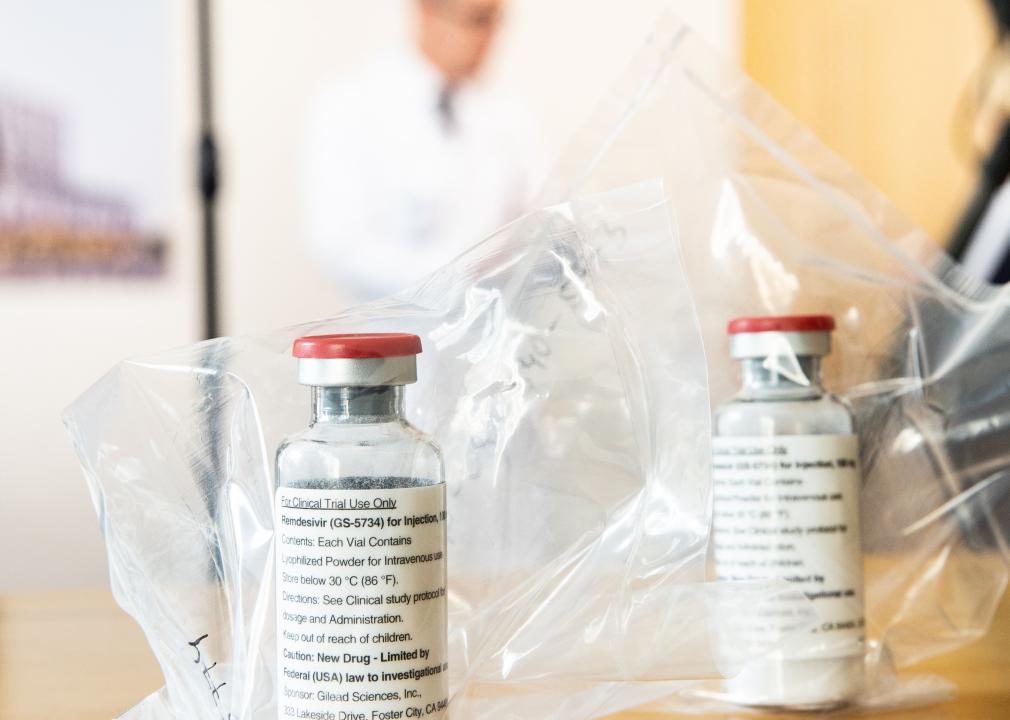 Remdesivir was another early drug that received Emergency Use Authorization in spring 2020. This antiviral drug, made by the biopharmaceutical company Gilead Sciences, was shown to shorten COVID-19 patients’ recovery time in a trial run by the National Institutes of Health. After its emergency authorization, the federal government purchased about 500,000 treatment courses of remdesivir to distribute to U.S. hospitals between June and September 2020.

Later, in 2020, hospitals started working directly with Gilead to purchase the drug. It has remained one of the most widely used antiviral drugs for hospitalized COVID-19 patients and was fully approved by the FDA—a more rigorous process than emergency authorization—in October 2020. 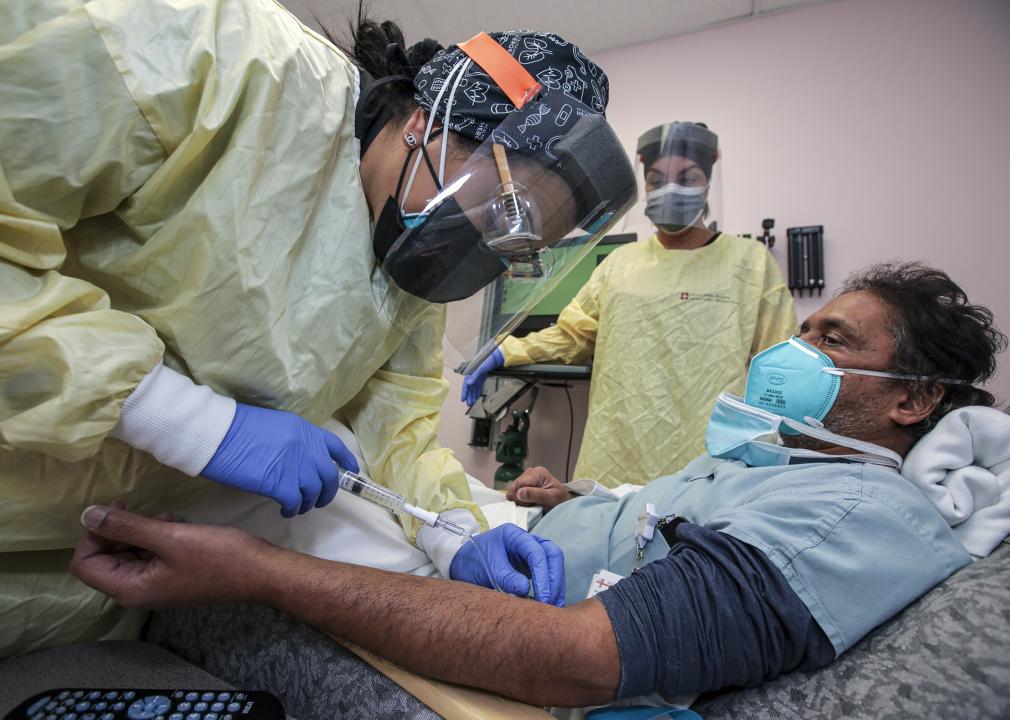 Pharmaceutical company Eli Lilly was the first to begin testing a monoclonal antibody treatment for COVID-19. In these treatments, patients receive infusions of lab-made immune system proteins that are designed to fight off the coronavirus. The treatments effectively give a boost to the immune systems of patients who are particularly vulnerable to severe symptoms. 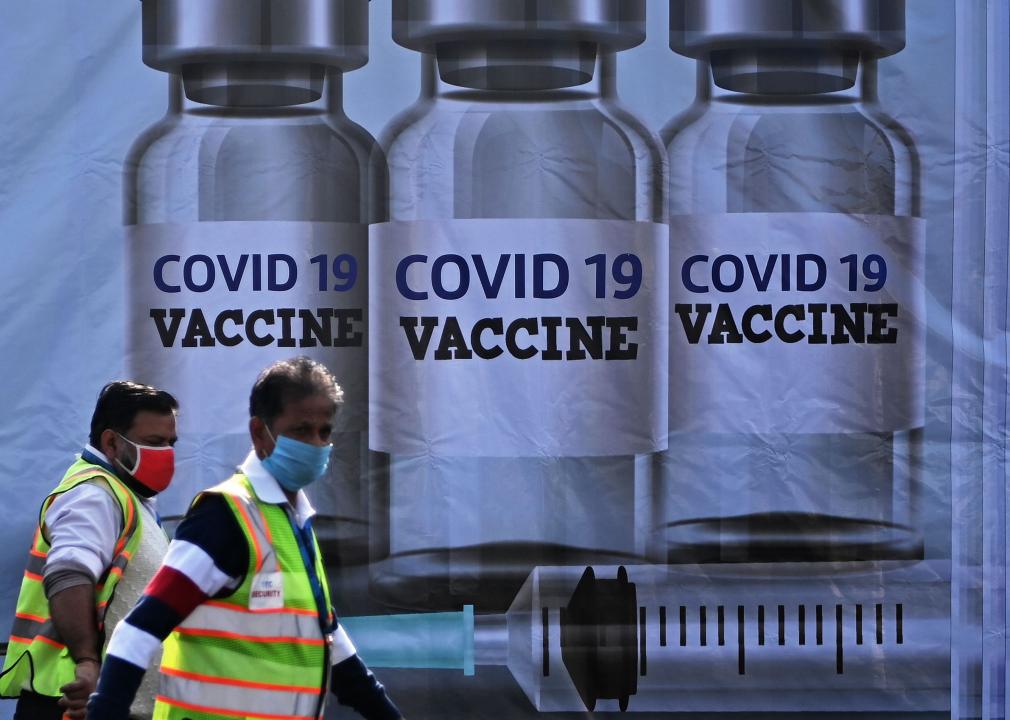 Less than a year after Chinese scientists publicly shared the coronavirus’ genetic sequence, two mRNA vaccines designed from this sequence received emergency authorization from the FDA. Many scientists and health experts considered this quick timeline a “miracle,” as no vaccine had ever been produced so fast in human history.

The Pfizer/BioNTech and Moderna vaccines were able to progress so quickly because both BioNTech and Moderna, along with the National Institutes of Health, had been working on coronaviruses and genetic sequence-based technology for years before COVID-19 hit. In addition, the Trump administration poured billions into vaccine development and production through “Operation Warp Speed,” allowing the COVID-19 vaccines to move through bureaucratic hurdles more efficiently.

The U.S. vaccine rollout started on Dec. 14, 2020, with a New York City critical care nurse receiving the nation’s first dose. Healthcare workers and nursing home residents were first in line for doses, followed by seniors and other immunocompromised and otherwise vulnerable Americans. 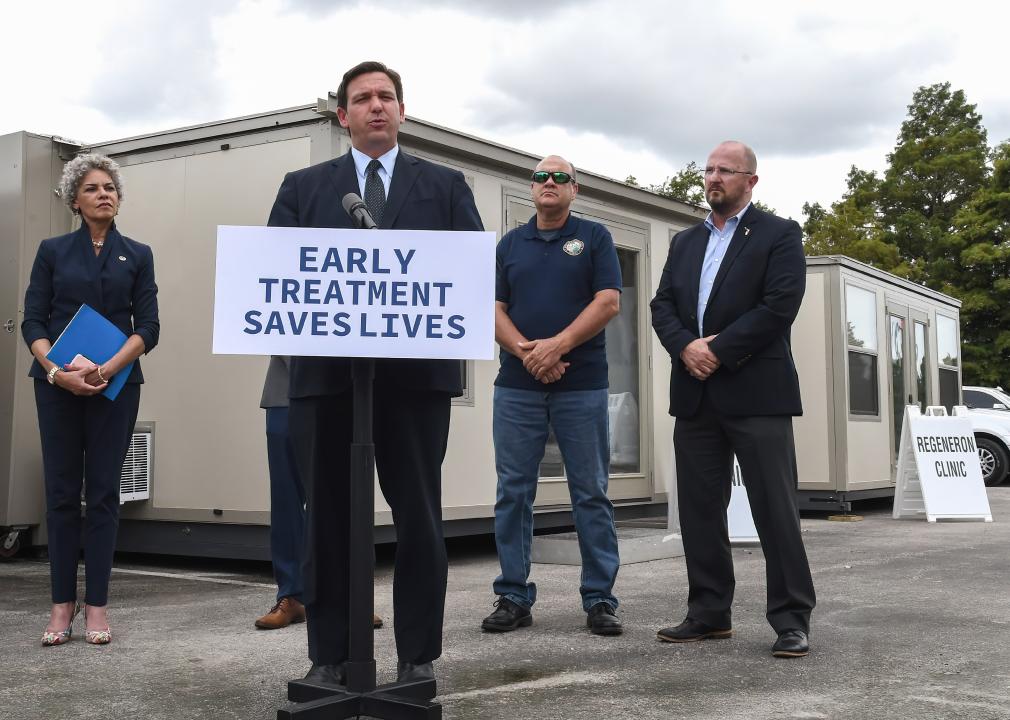 Republican politicians who are hesitant to alienate their bases by encouraging vaccination have instead turned to monoclonal antibody treatments as an alternative option for reducing COVID-19 deaths. During the summer 2021 Delta surge—which primarily hit Southern, Republican-led states where mask mandates also served as a political tipping point—governors in Florida, Texas, and other nearby states set up monoclonal antibody clinics where residents could receive these treatments for free. 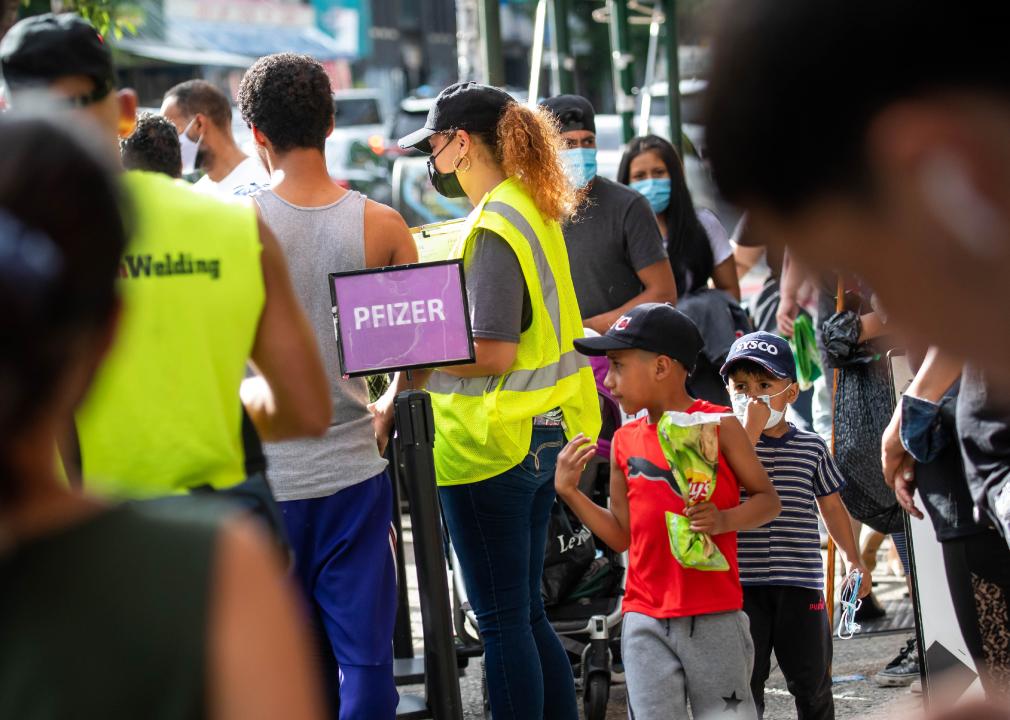 Eight months after Americans started receiving the Pfizer/BioNTech vaccine under Emergency Use Authorization, the FDA fully approved this vaccine. “The public can be very confident that this vaccine meets the high standards for safety, effectiveness, and manufacturing quality the FDA requires of an approved product,” Acting FDA Commissioner Janet Woodcock said in a statement at the time.

Some public health experts hoped that the full FDA approval would help to convince vaccine-hesitant Americans—concerned about the rapid timeline for COVID-19 vaccine development—that Pfizer’s vaccine was entirely safe and effective. However, polling and data analysis afterward found that the full approval had a limited impact on vaccine uptake. Vaccination rates went up slightly in late August 2021 but fell again in September. 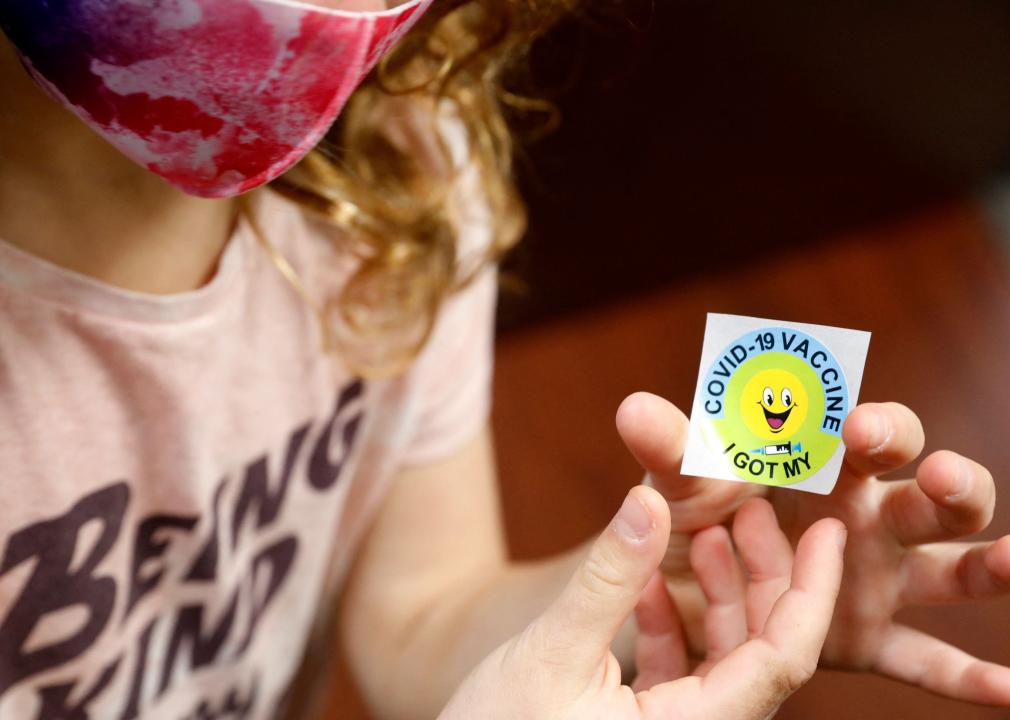 Millions of parents rejoiced in early November 2021 when the FDA and CDC authorized a version of the Pfizer/BioNTech vaccine for children ages 5 to 11. Enthusiastic parents got their children vaccinated in time for the 2021 holiday season. But overall, uptake in this age group has been low so far, with just over 28% of children in this age group having received at least one vaccine dose as of January 2022.

Meanwhile, parents of the youngest Americans (those under 5 years old) are still waiting on vaccine authorization. In December 2021, Pfizer found that two doses of a low-dose version of its vaccine did not provide a strong immune response in children ages 2 to 4; after initially applying for FDA authorization with two doses while continuing to test a third dose, the company postponed its application in February 2022 to wait for more data. 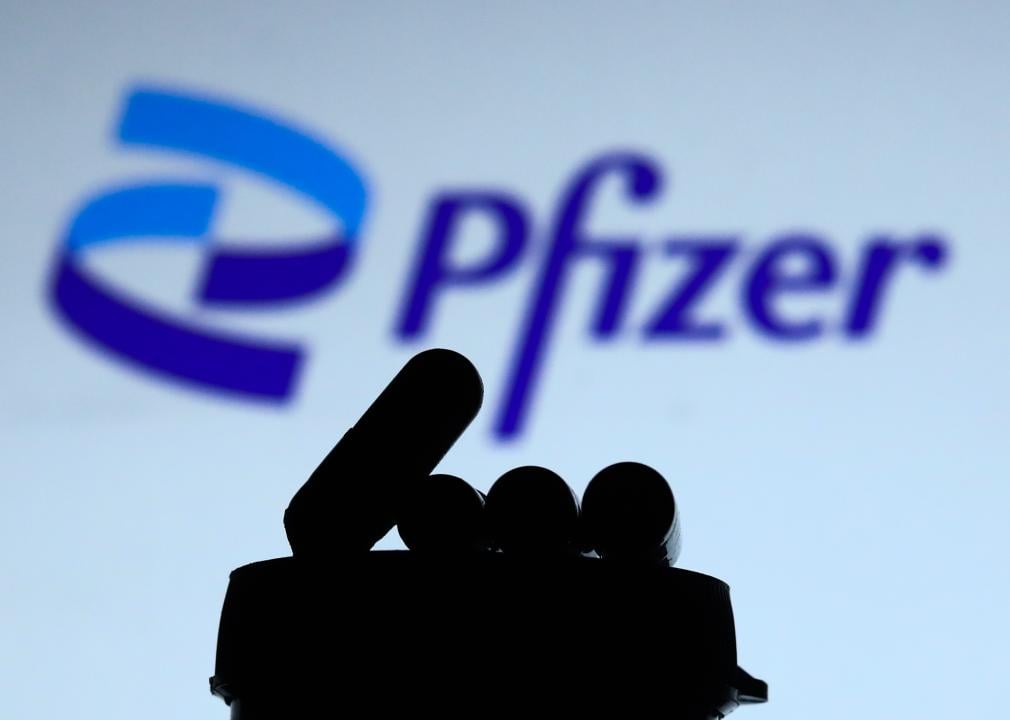 As of December 2021, Americans who get infected with the coronavirus now have two options for treatment that do not require infusion in a health care center. The FDA provided emergency authorization to two antiviral treatments in pill form: one produced by Pfizer, the other by Merck.

Both pills work by stalling the coronavirus’ replication in the body, leading to a lower risk of severe symptoms. The Pfizer pill, called Paxlovid, has been much more successful in clinical trials: It reduces the risk of hospitalization and death by 88%, compared to 30% for Merck’s pill. For both treatments, patients must get a prescription and begin taking the pills within five days of onset of COVID-19 symptoms—which can be challenging, as supplies of the drugs are limited in the U.S., as of early 2022. 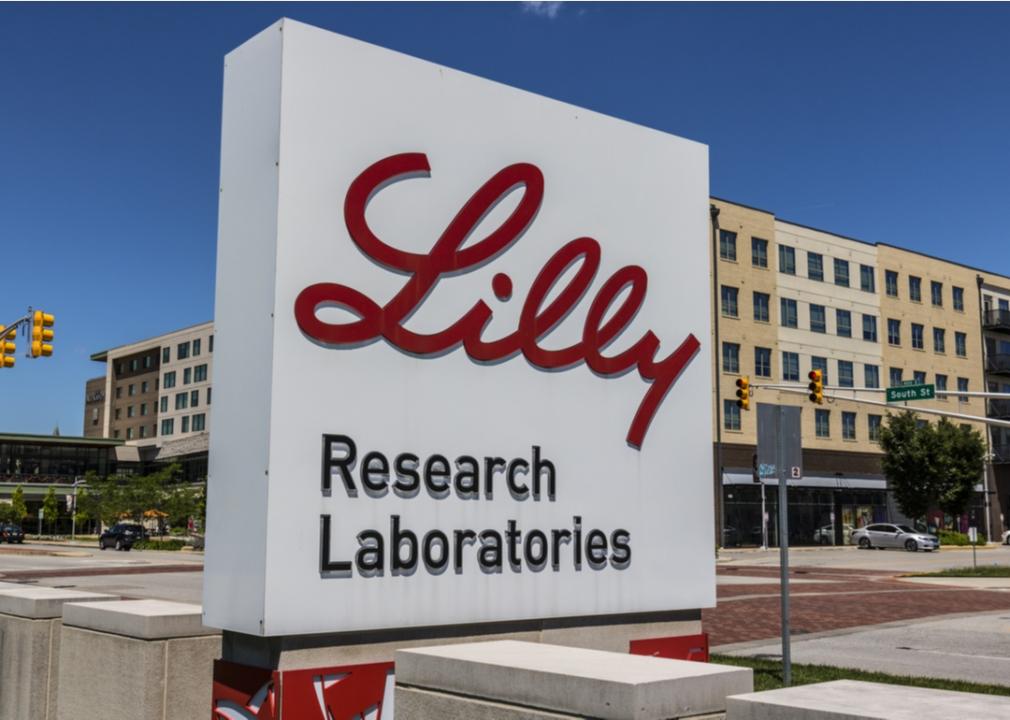 The Omicron variant caused a major shift in COVID-19 treatment availability, as scientists at Eli Lilly and Regeneron quickly discovered that their monoclonal antibody drugs no longer worked well against this version of the virus. Consequently, the FDA limited its emergency authorization for their use. Nonetheless, some of the same Southern states that popularized these drugs in summer 2021 continued to provide them during the Omicron surge despite their ineffectiveness.

Eli Lilly responded to the situation by developing a new monoclonal antibody treatment, called bebtelovimab, that is effective against Omicron. According to the company, this new drug also works against BA.2, a sister lineage of Omicron that has garnered some concern as it is even more contagious than Omicron itself. The U.S. government has purchased 600,000 courses of bebtelovimab, to be distributed in February and March 2022.

The above article was first published on Stacker and has been republished with permission. The Auburn Examiner has not independently verified its content.

Published in COVID-19, Health and News