A 2015 King County Community Health Needs Assessment report indicated that south King County, was among the most negatively impacted areas in the state for health, housing, and economic opportunity.

According to the report, “overall King County rankings on measures of quality of life, socioeconomic status, and health are among the highest in the country. As with poverty, however, these averages mask stark differences by place, race, and income. People of color, people living in poverty, and those living in communities with few opportunities also experience the health-related impacts of inequity. Any efforts to improve the health of the community and to successfully achieve the triple aims of better health, better care, and lower health care costs will require strategies that acknowledge and tackle these disparities.”

The report’s data showed indicated Auburn has some of the highest rates of behavioral/mental distress, obesity, smoking, diabetes, low income, and unemployment.  Data also showed that average life expectancy in south King County was 13 years less than other areas. 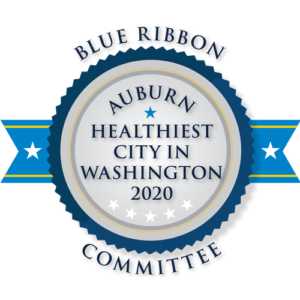 Concerned by these findings, Mayor Nancy Backus formed the Blue Ribbon Committee, with the goal of being the healthiest city in Washington by 2020.  According to the city, “the committee consists of a large body of volunteers with representatives from our clinical partners, MultiCare Health System, and seven major stakeholders: Auburn School District, Muckleshoot Indian Tribe, Green River College, Valley Cities Mental Health, Auburn Valley YMCA, HealthPoint, and Seattle-King County Public Health-Auburn.”

We spoke with Pat Bailey, City of Auburn Healthcare Consultant, about Auburn’s Blue Ribbon committee and the Auburn’s success with the R.E.A.D.Y. program.

Auburn Examiner: Tell us about the Blue Ribbon Committee and its goals.
Pat Bailey: At the first meeting in April of 2016, The Blue Ribbon Committee for Auburn – The Healthiest City in Washington – 2020 developed their vision – “Healthy Auburn for Life,” and their mission “To optimize the health and well-being of all through education, participation, and innovation.” They chose to focus on three of the nine major health issues that were identified through Community Health Needs Assessments as top concerns for Auburn: Behavioral and Mental Health issues and Substance Abuse; Healthy Weight for Adults and Children; and Maternal Child Health. Sub-committees were formed and subsequently created two programs to begin working on under each issue.

AE: How was the R.E.A.D.Y.℠ program developed?
PB: The Behavioral/Mental Health Sub-Committee discussed the complexity of this issue and made the decision, to begin with, “Increasing awareness in the Auburn community of the most common behavioral and mental health issues and substance abuse.” After researching the availability of courses, only one – an eight-hour course called “Mental Health First Aid” was identified which was not feasible to achieve the goal of presenting the program to as many people as possible in the Auburn area. With the support of the Mayor, a one-hour program R.E.A.D.Y.℠ (Real Emergency Aid Depends on You) was written and developed (in four months) to provide:

The Auburn Police, who each have 40 hours of Crisis Intervention Training, and the Valley Regional Fire Authority are included in this program to provide information and assurance of their roles in these crises.

AE: How many times has R.E.A.D.Y. been presented, and what has the reception been like?
PB: R.E.A.D.Y.℠ – the CPR of mental crises as we describe it, was presented a few times in the community with very positive feedback and the “kickoff” of R.E.A.D.Y.℠ was in February 2017. Since that time, we presented to almost 1,500 people, and, then, put the video on the City’s YouTube channel and Facebook page: https://www.facebook.com/HealthyAuburn/. In addition, we have sent DVDs to approximately 50 groups. We continue to schedule presentations as requested: [email protected]

In early 2018, we completed a Spanish translation of R.E.A.D.Y.℠ and [presented] it to a Spanish-speaking group in October.

AE: Will any other version of R.E.A.D.Y.℠ be made available?
PB: One in every five adults will experience some type of mental illness, and just recently, NAMI (National Alliance for Mental Illness) reported that one in every five teens will experience some type of mental illness.  Therefore, we have just completed the first draft of TEEN R.E.A.D.Y.℠ and plan to take it to middle and high school students during the 2018-2019 school year.

Several people have told us, if they only had information like this before their involvement in a mental/behavioral crisis, it would have helped them so much. “They did all the wrong things.”

AE: How did it feel knowing Mayor Backus was receiving two national awards because of the R.E.A.D.Y.℠ program?
PB: Mayor Backus was totally involved in the creation of this program from day one. Her commitment and support and the support of all members of the City Council made it happen.

The Mayor received two national awards: one from the American Medical Association in February and the second from the US Conference of Mayors in June.

The fact that the Mayor and the City of Auburn were nationally recognized for the public health work with the R.E.A.D.Y.℠ program was humbling, and, yet well deserved. Auburn is a wonderful, collaborative, caring community but more often is recognized for a weakness or negative. We were so excited and very appreciative of the awards.

In addition to the online R.E.A.D.Y.℠ as mentioned above, the city can send you a DVD or schedule a presentation.  For those interested, the curriculum is available pro bono for anyone who wants it, email [email protected].

The R.E.A.D.Y.℠ presentation presented online (video above) is approximately one hour long.  Immediate crisis resource information is available in this article.