By Elizabeth Miller on November 3, 2018
Advertisement

Randy and Sandi Green felt the power of community after their annual Halloween display was vandalized last year. This year they harnessed that power to honor their friend and neighbor, fallen Kent Police Officer, Diego Moreno. Donations immediately began pouring in after the first Annual Diego Moreno Food Drive was announced. Collecting 3,402 non-perishable food items for the Auburn Food Bank and $2,106 for NW Harvest, the food drive surpassed its goal.

Because Hunger is Scary

Leading up to Halloween night, Sandi Green shared updates about donations to the food drive on social media. Neighbors and strangers alike made trips to the festive Halloween display to contribute to the food drive. One woman, Debbie, drove from Kent in rush hour traffic to make her donation. Another man, Moses, took three buses after hearing about the food drive and made a $30 contribution to the drive. An anonymous donor

Local businesses also donated to the Diego Moreno Food Drive. Moreno had a special place in the hearts of those at Tre Sorelle Salon, prompting them to contribute 148 items. After seeing Sandi Green’s announcement, the owners of Lakeside Doors donated 170 items. According to one of Sandi Green’s updates, a police officer and his wife went out of their way to find the display, because they “‘just wanted to help.”

Adults weren’t the only ones showing their generosity. One Trick or Treater came bearing a handful of change, his allowance, to give to the drive. A post from Sandi Green described another donation from a child, “tucked in one of the food donation bags was another bag, obviously tied by a child. Inside was a movie and what looked to be a well-loved little wooden bus, perhaps a character from the movie, itself. Thank you, little one for making another child’s life better.”

Serendipitously, the first Trick or Treater of the night was dressed as a police officer. “Officer Ethan” and his family traveled from Renton to join the cause to fight hunger. Sandi Green counted 1,200 Trick or Treaters throughout the night, handing out 1,300 Twinkies. Inflatable costumes were popular this year, with the T-Rex being the most frequent costume to come to the Greens’ display. Other common costumes of the night were characters from Disney’s CoCo.

At the end of Halloween night donations to NW Harvest on Facebook had reached $2,056. The final total raised is $2,106. As part of NW Harvest’s ‘Hunger Stops Here Challenge’, these donations will be doubled to total $4,212. “The total increased a bit more. I think the $2,056 is cool!,” said Sandi Green.

On Thursday morning Sandi and Randy Green collected, packed and delivered the donated food to the Auburn Food Bank. The 3,402 items collected weighed 2,934.10lbs. In addition to the non-perishable items, two checks totaling $125 were received. These checks give the Auburn Food Bank $600 in buying power.

“Debbie Christian and her team are so dedicated to ending hunger. Her team welcomed us with open and grateful arms. They were so excited about how much was donated, and Debbie expressed how much good it did for our community and how many people they will be able to feed. They are people that you want to be involved with, “said Sandi Green.

Impact You Can See

Debbie Christian, Executive Director of the Auburn Food Bank, shared that it was both humbling and an honor to be the recipient of the Diego Moreno Food Drive donations. “We highly respect our police officers and to be chosen to carry on Officer Moreno’s legacy is a blessing!”

Community support is the food bank’s lifeline. Currently, the food bank serves 600 families a week. According to Christian, donations of this quantity go a long way. Large donations like the Diego Moreno Food Drive’s contribution can supplement what the food bank has for a week. The food bank is always ready and able to assist companies or neighborhoods with food drives or specialty drives (like socks, diapers, hygiene).

As the weather turns colder, the reliance on food bank resources increases. “Cold weather always brings challenges for families. They have to pay higher utility bills to have heat so that usually means less money for their food. If we have power outages, then families lose all the food in the refrigerator or freezer and need more. Coming through the winter months, cash is the most helpful as we will have higher requests for support of rent, utilities, and emergency needs. 97cents of every dollar goes to our programs and supporting families.” 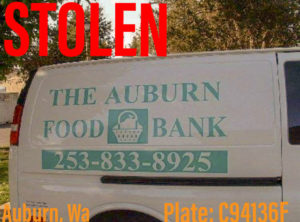 On Tuesday, October 30th one of the food bank’s vans was stolen from their property. The van is used to perform food deliveries, as well as food pick up from stores. Combing two routes into one doubled the route time, increasing hours of the staff and volunteers. Christian explained that the increased time also “puts us behind at picking up from stores – who also have a timeline for us to be in and out without affecting their business and flow.”

Hearing about the stolen van, Way Scarff Ford in Auburn stepped up and loaned the Auburn Food Bank a van. “It broke our heart to hear the delivery van was stolen. We are all about stepping up and helping our community whenever we can. Especially as the weather gets colder, struggling families in Auburn need assistance more than ever. It’s the least we could do for Debbie and her team! We’ve always loved supporting them. [We’re] hoping the van [is] found ASAP, but in the meantime, we are always here to help however we can, “said Chelsea Scarff.

The stolen van is a white 2000 Dodge Ram van, plate C94136F. It DOES NOT have the Auburn Food Bank logoing on it. The van has a small antenna on the roof near the windshield. If you see the van, please contact police immediately.

Published in Community Support and News